It has been a very wet start to summer with most of the rivers in NSW, Victoria and Queensland on flood alert and our best wishes go to all those affected by the rising waters.

From a fishing perspective the start to the Cod season was a difficult one; once again the floods and storms put a dampener on that first weekend of the cod season.

In most cases the rivers were unfishable and a lot of attention turned to the impoundments. Blowering, Burrinjuck, Hume weir and Eildon, full or at the best levels seen in a decade had an influx of anglers trying in the most part, the experience of fishing a full impoundment.

Lake Mulwala fished reasonably well with a reduced number of anglers making their annual pilgrimage to kick off the season.

The Murray like all the other rivers is in flood and Lake Mulwala was just about the only option in the area.

Trolling dark coloured lures worked the best in the dirty water with colour EJ (red head black body and white stripes) the stand out in Mulwala. The 100mm Plow the best sized lure, while the 75mm Plow in colour YH (fluro pink yabby pattern) accounted for some nice yellow belly.

An early Christmas present for our South Australian anglers has come with the announcement that the restrictions to Cod fishing will be lifted from 1/1/2011. There will be some changes to the regulations which include a total catch & release of all Murray Cod regardless of size and the removal of any sized cod from the water for photos will also become an offence.

This vindicates our stand on not putting photos of big cod held up out of the water on our gallery.

There are some other restrictions regarding some remaining closed waters in SA, so as always please check the local regulations.

The same unfortunately can’t be said for the Northern Territory. New regulations will come into force early next year that affect the travelling fisherman heading north to catch barramundi on the Daly River and Mary river system.

On the Daly the bag limit per angler has been reduced to 3 and the number of Cheribin is 10 these regulations I feel are aimed at the Grey Nomads and those fishermen that head north each year in search of the mighty barramundi.

I believe the new regulations have already had an impact with 3 groups who go up each year saying they won’t be going. For a territory that depends so much on tourism why turn them away?

The other problem is that by reducing the bag limit people will be keeping the bigger fish which are the females and inadvertently reducing the brood stock, thus creating a bigger problem, time will tell.

The Lower Murray Lure Fishing Club sent through some photos of their fishing competition that Oar-Gee Lures proudly sponsors. I hope you all had a good time and as a sponsor it is pleasing to get a report and acknowledgment for that support, well done.

Congratulation must also go to the breeding staff at the NSW Fisheries Hatchery at Narrandera; they have been the first in the world to successfully breed Macquarie Perch in captivity, and this is a big feather in their cap, this program has been funded by your fishing licence.

The winner of our November photo of the month goes to Jane with her Spanish mackerel, caught on an Oarsome 130 of Port Hedland WA.

Our lure of the month is the 75mm Plow in either the 4.5mt or 7.6mt model and is perfect for trolling early in the season for cod and yellow belly.

Christmas is nearly upon us and we would like to wish everybody a Merry Christmas and a happy and safe New Year. 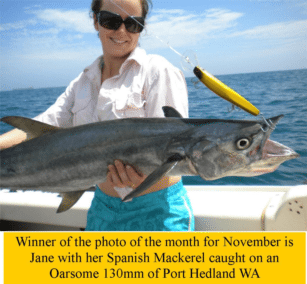 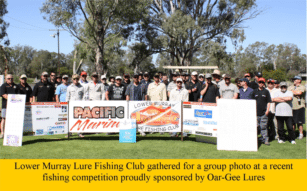 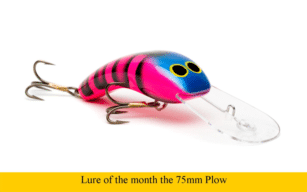