Thank you for your fantastic response and comments on our new web site.

It has been one month since going live and so far we have had over 1000 hits.

The 1st of September sees the closing of the Murray Cod season in NSW and Victoria.

The wide spread rain falling over much of Australia will increase the chances of a good breeding season for Murray cod.

With all the western flowing rivers and creeks in southern NSW and Victoria on flood alert, all we need now is some warm days to get the water temperature up around 18degrees to encourage the cod to start their spawning season.

The Golden Perch will also benefit from the increased water flows and will start spawning as the water temperature rises.

At the time of writing all the impoundments are rising with Blowering Dam and Burrinjuck Dam   levels getting very close to 80%, and still rising.

Wyangla dam which has suffered the most over the past years of drought is on the rise and will continue upwards from its current level of 20% which is 19% better than a couple of months ago.

Hume weir is expected to fill while dams in Victoria that were basically dry some months ago are now reaching capacity.

The Murray and Murrumbidgee rivers are receiving some of the biggest winter / spring flows for what must seem like a decade.

It is hoped that these flows moving into the lower reaches of the Murray will allow for the Murray Cod season to be reopened in the near future in South Australia, even if it means putting more restrictions in place  while still allowing recreational anglers the opportunity to fish.

In response to the number of people that sent in photos for our galley we have decided to have a photo of the month.

Each month we will select a photo and that person will receive an Oar-Gee lure of choice for their efforts.

This month it was difficult to go past Trevor giving his 103cm Barramundi a cuddle. It was Trevor’s first barramundi fishing trip and landed the 103cm Monduran barra on an Oarsome 90 barra lure,

Well done Trevor we will be in touch with you to organise your lure.

Next month we will be adding a junior section with the aim to have our junior anglers in with a chance to win a free Oar-Gee Lure while encouraging catch and release and safe handling of your fish.

Email your photos of any species of fish caught on an Oar-Gee Lure with a description and name to wayne@oargeelures.com.au

With the close of the Murray Cod season, anglers will be heading to the trout impoundments, so our lure of the month for September is the Oar-Gee Lil Ripper.

This versatile lure is perfect for trolling or casting and can be run alongside the traditional winged lures as a viable alternative.

Colours that are popular so far have been  HF, SL, WO, RG,AS and the brown and rainbow trout patterns, colour F has been a very effective colour for Trout in the Tasmanian lakes.

With most tackle shops retailing the Lil Ripper well below the price of imported trout lures it’s not only an effective fishing lure at a good price, it is Australian made.

Retailers, now is a good time to get your stocks in for the opening of the NSW Trout season starting in October.

For those anglers in the Tamworth area we will be having a tackle night at TAMWORTH FISHING TACKLE & GREAT OUTDOORS, 15 RODERICK STREET, TAMWORTH on Thursday night the 23rd September. Give Dean a call on 02 67667100 to book.

We will be talking all things fishing as well as lure use and rigging demonstrations, the representative from Lowrance will also be attending to pass on valuable information on sounders. It is an information night, but I’m sure Dean will be having some specials on for the night. Look forward to seeing you there.

NSW Fisheries are having a family day at the Narrandera Fisheries Centre on Saturday the 9th October; there will be demonstrations on fishing, talks on the fantastic work done by the staff at the hatchery, cooking demonstrations by a celebrity chef, casting competitions with a lot of prizes for winners, as well as talks and demonstrations by well know local anglers.

Oar-Gee lures will be on hand with a display of our lures and new colours and welcome the opportunity to have a chat to all the anglers in the region.

It will be a day not to be missed.

Until next month good fishing. 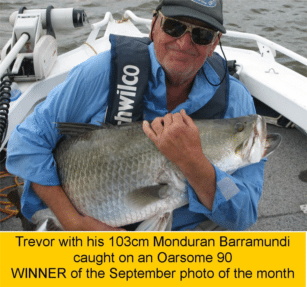 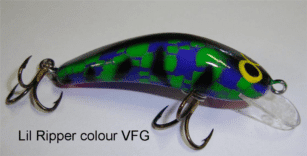