Oar-Gee Lures have taken the original number 1 timber prototype 100mm Plow and had it mounted in a beautiful frame.

This is the first timber 100mm Plow prototype made by Oar-Gee Lures for field testing, and then given to the tool maker to digitise and make the moulds for the plastic injection of the lure.

The lure has been sold.

We decided to take the lure to a major fund raising function supporting the Protate Foundation. the lure was auctioned to the highest bidder reaching $1500, 3 times higher than the best bid recieved since putting it up for sale.

This is a fantastic result  for the Prostate Foundation with all the money raised being given to the foundation to support mens health.

We hope to have some more details and photos shortly.

In the mean time we are checking to see if this amount is close to, or is an actual record for the sale of a single Australian made lure.

A big thank you to Steve from Trelly’s Tackle World in Shepparton.

Advice I have recieved from the leading lure lovers web site is that we have equalled the highest price paid for a single lure in Australia, two other lures were sold for $1500 in the past. 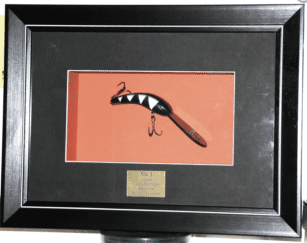