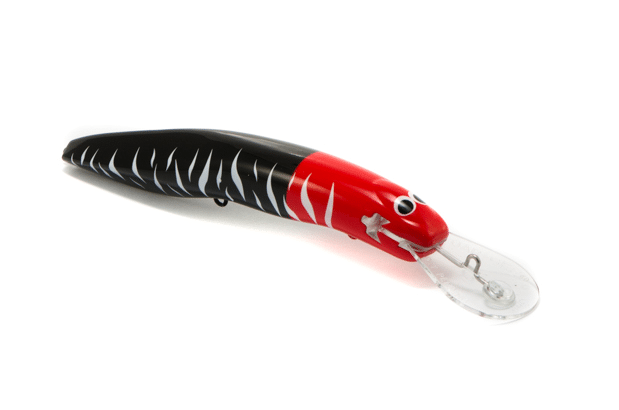 The Oarsome 130 is a minnow or a thin body lure 130mm in body length and comes in three depth options.

Our patent pending, body design, rattle and bib locking system  makes this a very strong lure to handle the rigours of fishing for Barramundi, Tiger Fish in Africa, Black Bass in Papua New Guinea as well as blue water species like Spanish Mackerel, GT’s Queenies and other saltwater species.

Our unique body design gives not only strength but a rolling action that can be achieved at the slowest of retrieves or trolled at speeds in excess of 10kph.

The patent pending bib locking system offers superior strength without the use of any glue in the lure assembly.

Removing the size 1 trebles and replacing them with 2 VMC 9626PS size 2/0 trebles is an option for those prefering this rigging method.

for Tiger Fish the Oarsome 130mm is rigged with one VMC inline single at the front and one VMC Scorpic treble at the rear, for Black Bass the lure is rigged with the new VMC 6x strong trebles and matching rings.

The buoyancy of the Oarsome 130mm allows this lure to be trolled successfully in the timber and snags of our rivers and impoundments without continually reversing to retrieve fouled lures.

The Oarsome 130mm has been used by winners and top placed teams in the Barra Classic and Barra Nationals held on the Daly River in the Northern Territory as well as fishing competitions in Northern Queensland.

Tiger Fishing in Africa requires lures that will not only catch fish but be strong and durable to handle these lure destroying fish. Tiger Fishing guides in Africa are using the Oarsome 130mm and Oarsome 90mm for their clients from one group to the next and they are still going strong and landing many trophy sized Tiger Fish.

Black Bass Fishing in Papua New Guinea requires the absolute best in strength, depth and action. Black Bass over 40 pound will destroy any lure not strong and well made, the Oarsome 130mm in the 5mt depth is the go to lure recommended by Angling Adventures for their clients fishing this wild and remote location in PNG.

Blue water fishing for pelagic species with the Oarsome 130mm has become more popular as this lure achieves great success, Spanish Mackerel, GT’s Queenies, King Fish Tuna and many other saltwater species have fallen to this lure, trolling speeds up to 10K/h make it ideal for this style of fishing.

Available in a range of colours suited to each species

As with all our lure range, attaching lure to line with a loop knot is the preferred method, if using clips the best quality is essential. Wire traces are also an option when fishing for Tiger Fish.

After 2 years preparation we attended the South African Fishing Tackle Distributors Trade Show in Johannesburg in August 2013. The show was very successful with a lot of interest in our lures and our partners Tiger Lures.

Our range
Menu
About us

In 1985 Oar-Gee Lures was born from a lack of good lures for Australian Native fish. The Mighty Murray Cod is native to Australia and requires lures that have a wide action, depth and most importantly strength. These attributes are rarely found in imported lures so we decided to start making our own. From those humble beginnings Oar-Gee Lures

Feel free to drop us a line, by phone, or fill out the form below to send us an email.

Please let us know where you live, add state and country when registering or contacting us.